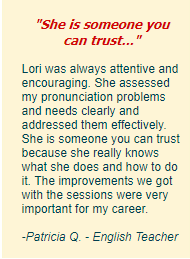 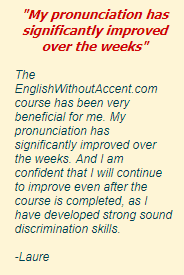 Your teaching guided me through correct pronunciation and helped me know exactly what my problems are in English pronunciation.
–Na Yeon

Now I am so confident in my English pronunciation. I wish I knew about this program earlier.
–Yongfa

Your course has taught me a lot and has been a superb eye-opener. I think you should have charged me more as I feel I have certainly obtained significant value for the money. I recognize the time you must have taken to listen to my recordings and make all those pertinent comments and recommendations (something simply not available on the off-the-shelf books and CD-ROMs) and which have been essential to my progress.
–Cris

Some people believe that they can improve their accent just by practicing with a self-taught method. Unfortunately, this is not possible. It is absolutely crucial to have a very qualified professional to detect what your sound errors are, show you what you are doing wrong and what you should do to produce the sounds correctly. Otherwise, you might just reinforce your mistakes. I had had contact with other speech pathologists before choosing EnglishWithoutAccent.com and felt that they would not be able to help me because of their approach. The speech pathologist at EWA totally understands all the aspects involved in the production of sounds and is aware that people are different. Because of that, she adjusts her method to the client’s difficulties and needs. I was also very glad as she provided feedback on some aspects of my speech which I was not even expecting to be included in the course. It could not have been better!
– Luci

After a long time I finally found this wonderfully structured course which was based on my needs. It has improved my pronunciation, intonation and accent of my speech which makes me more comfortable at work. Now I feel more confident while talking to others especially with doctors, patients and co-workers. I’d definitely recommend Lori Edwards to others who interested in improving their accent.
– Chitra

Taking the accent reduction course was one of the most useful investments in my education. The course was extremely helpful. It helped me understand my errors and get the correct pronunciation. This will have long lasting effect even though I don’t live in an English-speaking country. Lori, my instructor was patient, knowledgeable and fun to work with. Thanks!
– Denisa

Why Are Accents So Difficult to Overcome?

During childhood, the ability to acquire a new language is at a peak, and the process of language learning occurs rapidly, effortlessly, and unconsciously. By young adulthood, however, learning a second language becomes a slow, laborious experience frequently requiring years of study and practice. Even then, most individuals continue to experience much difficulty and frustration in spoken communication because of inadequate pronunciation skills in their new language.

Learning the new sounds, rhythms, and intonation of a language is a separate process from acquiring vocabulary and grammar. This is shown by the fact that one’s pronunciation of a second language rarely improves with the passage of time, even after years of continued exposure and use. This pronunciation rigidity is a direct consequence of the individual’s native language speech patterns, which become extremely resistant to change in adulthood. Therefore, the interference created by these native language speech habits can rarely be overcome without specialized training and practice.

How Speech is Produced

As you know, speech is made up of different sounds put together in different combinations to form words. Every language has its own unique system of sounds and ways of combining these sounds. Before taking up the sound system of American English, it is helpful to have a basic understanding of how speech is produced or made.

The first thing you need for speech or talking is sound. You must produce an audible tone or sound, and the source for speech sounds is the air stream coming from your lungs. During normal breathing, this air stream is inaudible. During speech, the vocal cords in the throat (voice box) open and close rapidly, breaking up the air stream into a series of puffs. That is, the air is set into vibration, which produces sound.

Try it now. Take a breath, open your mouth and say “ah.” This is the basic way sound is produced. Try it again. This time hold your hand firmly against the front of your throat, over your voice box. As you say “ah”, feel your throat vibrate. Next, try making the “ee” sound in the word “see”. Notice that your mouth is almost closed when you make this sound. Now alternate between the “ah” and “ee” like this: “ah-ee-ah-ee”. Feel your mouth open and close and change its shape. This is one way you produce different sounds, by changing the shape of your mouth.

Another distinction is that the vowel forms the core of a syllable, i.e., the syllable functions as an independent unit of speech that can stand alone without an accompanying consonant. Consonants, on the other hand, cannot stand-alone or function as independent units of speech.